Claims of Enlightenment Made by Ancient Dzogchen Masters

Claims of Enlightenment Made by Ancient Dzogchen Masters

Over the years I have repeatedly written about the principles of pragmatic dharma. Once again, here is Vincent Horn's article for those who are new to it. Last time I wrote about this was just a week ago in this text. This blog continues on the theme of claims of attainment, this time not made by myself or other contemporary teachers but by ancient masters of the dzogchen lineage.

Two days ago, for the first time ever, I opened a book entitled ”The Supreme Source, Kunjed Gyalpo, The Fundamental Tantra of the Dzogchen Semde”, translated by Chogyal Namkhai Norbu Rinpoche and Adriano Clemente. This book was first published in Italian in 1997 and in English in 1999.

As I was reading the first few pages of the book I found a section entitled Vairo Drabag that gives brief biographical descriptions of the founding masters of dzogchen teaching, namely Garab Dorje, his direct students and those further down the lineage.

As I started reading these short stories about the lineage founders, to my amazement, I found most of them making claims of having attained buddhahood! In the text that is part of the traditional dzogchen semde-teaching, transmitted within the dzogchen-lineage, it states in plain words how many of the ancient practitioners, several of them direct disciples of Garab Dorje, who according to traditional sources is estimated to have lived soon after the passing of Shakyamuni Buddha, state to have attained buddhahood. What amazes me is their directness. They do not give vague hints of having perhaps attained something, nor do they shyly deny of having attained nothing, nor do they leave the question unanswered. They say exactly how it is. Not having read this book before I am stunned how direct the statements are!

1) Then Mañjuśrimitra perfectly understood the meaning of the primordial state and expressed his realization thus:

I have realized my wish, cutting mind at its root:

Is not something other than my state! 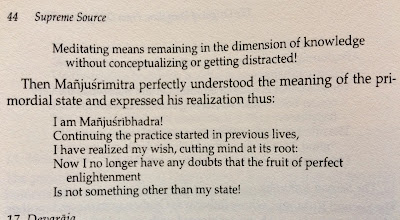 2) Then Nāgārjuna perfectly understood the meaning of the primordial state and expressed his realization thus:

Beginningless dharmakāya, not being composed of aggregates, is happiness.

The voice that is without interruption and transcends the very concept of "voice", not having material

The mind of wisdom that transcends the very concept of "mind," not having either birth nor death, is

I have understood that bodhicitta is total bliss!

3) Then Nödjyinmo Changchubma perfectly understood the meaning of the primordial state and expressed her realization thus:

Enlightened from the origin,

Mind itself is Bhagavan, the great spontaneously-arising state:

Samsāra has always been utterly pure.

Understanding mind, I have discovered the state of enlightenment!

4) Then Lui Gyalpo perfectly understood the meaning of the primordial state and expressed his realization thus:

Without needing to be forsaken, the emotions are the five great wisdoms.

Without needing to be removed, the three poisons are the perfection of Body, Voice and Mind.

Without needing to be eliminated, samsāra is the path that leads to the bliss of bodhi.

Thus has the state of knowledge of the Buddhas of the three times arisen in me.

5) Then Rabnang perfectly understood the meaning of the primordial state and expressed his realization thus:

From the great emptiness of the nature of mind

Arise all animate and inanimate phenomena,

Nevertheless, mind does not increase or diminish.

I have understood that great dharmakāya is the spontaneous arising and abating of phenomena!

6) Then Atsantra Āloke perfectly understood the meaning of the primordial state and expressed his realization thus:

Having perfectly mastered the method of "elimination," I have interrupted the flow of birth.

Having perfectly mastered the method of "union," I have severed the limit of cessation.

Having perfectly mastered the method of beneficial deeds, I have realized the absence of effort.

Having perfectly mastered the method of the siddhis, I no longer depend on the outside.

Having perfectly mastered the method of meditation, I remain in my state without correcting it!

7) The prince Thuwo Rājahati perfectly understood the meaning of the primordial state and expressed his realization thus:

Understanding that bodhicitta is pure presence that has no origin,

I have become the holder of the transmission of Samantabhadra Vajrasattva.

Without undertaking the path, I have attained simultaneously the three levels of enlightenment.

My state is equal to that of the Buddhas of the three times!

Here's another account by Lingchen Repa, student of Kagyu forefather Phagmo Drugpa. It's from the book "The Supreme Siddhi of Mahamudra":

Homage to the precious guru!

Lord, you told me to meditate on the innate essence,

And meditate is what I did; It so happened that meditation and meditator simply vanished,

And there was no post-meditation to uphold.

Through the experience of the torch of samadhi,

I realized the mind as the dharmakaya, free of elaborations.

And there was no straying to eliminate.

Through none other than the mind resting as it is -

Without altering with remedies -

Doubts about is it" or "is it not" simply vanished,

And there was no sense of discomfort left.

By recognizing thoughts as the dharmakaya,

Grasping to them as faults or qualities simply vanished,

And there was nothing to reject or accept.

Realization arose from within.

And there were no words to speak.

Are not different from my own mind,

And there was nothing to long for.

The bubble of illusory body is always destroyed.

As I realized that the mind is unborn and immortal,

The fear of death simply vanished,

And there was nothing to grieve about.

If we meet, I am in the presence of the lord.

If we do not, I wander aimlessly through mountain hermitages.

If hungry, I go for alms without attachment.

If cold, I warm myself with the heat of tummo.

If sad, I sing a song of spiritual experience.

If sick, I balance the elements.

I slash experiences of happiness or sorrow on the spot,

And go about my everyday life as I please.

Apparently, the ancient adepts and masters of the lineage had no problem whatsoever in stating what they have attained. I cannot help wonder happened along the way because in the present dharma culture this very act would be and actually is seen as an indication of heightened delusion, ignorant boasting and charlatanism. I would assume the ancient practitioners neither would have had a problem stating if their attainments were lesser. What we see in these accounts is a marvellous display of pragmatic dharma.

I cannot speak on behalf of the ancient masters but it is good to ask why these accounts were given in the first place and included within the lineage teachings for many centuries. Surely the accounts would have been left out if they were meant to be kept only between teacher and student or small communities. Thinking about it, I am actually surprised that they had not been edited out.

Whether public statements about one's attainments was widely practiced in history I cannot say but it should be acknowledged that these people are the first ones to practice dzogchen in this time on Earth and that they are the lineage holders in most dzogchen lineages alive today. If they openly stated what they reaped from their practice, maybe we could consider following their example and think about the benefits of doing this.

As I have stated, we do this in Pemako Buddhist Sangha. Also Lama Daniel Brown has made public statements of realised buddhas in his sangha. Unfortunately, to my knowledge, there are not other examples of this in tantric/vajrayana buddhism.

Surely there are many people who would benefit immensely of open, unsecretive and transparent discussion about attainments for transparency itself is an expression of the buddha within and a sign of its realisation.