I firmly believe that all yogic traditions like buddhism, hinduism, taoism and christianity have at some stages known and offered paths to full enlightenment. They still do in varying degree. One thing that enchants me is the similarity of practices in different traditions.

For example, in this photo you can see me sitting in meditation, or to be exact nonmeditation (skt abhavana), as it is known in Great Seal of Natural Awareness tradition (skt mahamudra). To be specific, this is a photo of an upward gaze of Leaping Over to the Great Enjoyment (tib thogal long ku, vyutkrantaka sambhogakaya). 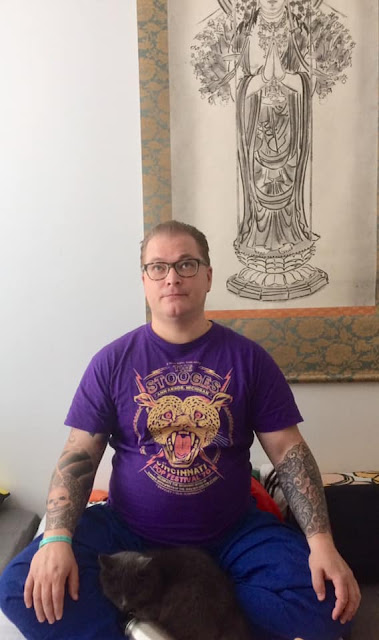 In most buddhist meditations separation is made between clarity aspect and energy aspect. For example, vipashyana and metta or cutting through and leaping over (tib trekcho and thogal, samapatti and vyutkrantaka). Same principles are in shaiva tantra as Siva and Shakti where the former is masculine principle and the latter feminine.

In many systems of hindu yoga, incl shaiva tantra that I’m familiar with, this gaze is known as Seal of the Divine Feminine (skt shambhavi mudra), or Seal of the Divine Energy. This mudra or meditation is practiced in both dzogchen of Tibet and tantra of Southern India, to realise the divine energy of enjoyment. To me, it is obvious that both traditions are referring to same principles and using the exact same practices... which I think is really cool. I do believe that there has been and still is, or at least could be, fully enlightened masters or mahasiddhas in all yogic traditions.

However, it is also my experience that a lot of yogic knowledge is scattered and that it is very rare to find everything one needs to know in one place. To gather the foundational knowledge and practices together is something I was told to do many years ago by my masters and I have.

Love and blessings to all,